Naslovna > News > What is it Like to Be Homeless?
News 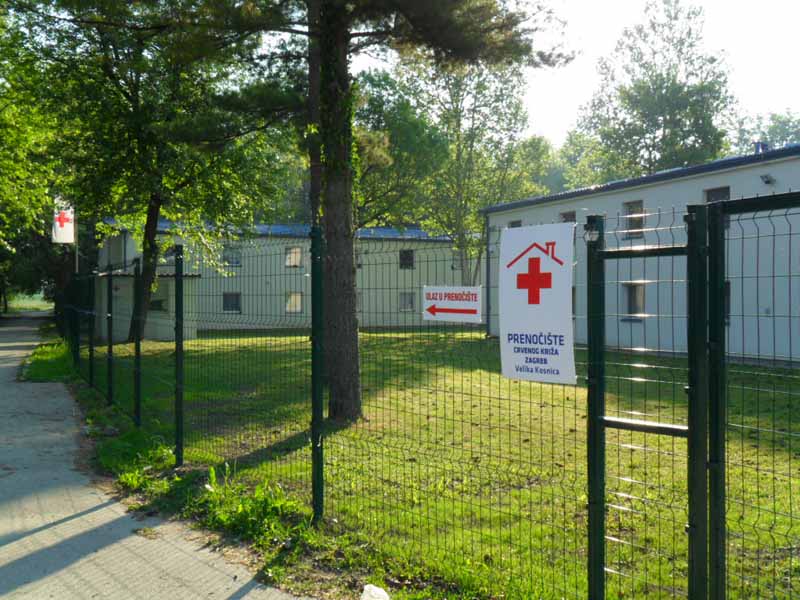 It is a known fact that the homeless are one of the most vulnerable and unprotected social groups. But what is it really like to be without a home, to sleep rough or live in a homeless shelter and to feel invisible to the rest of the society? On the occasion of the World Homeless Day, we spoke to several residents of a homeless shelter in the vicinity of Zagreb and a formerly homeless man who has managed to turn his life around.

“It Can Happen to Anyone”

“A year ago I didn’t think I could end up like this,” says Katarina, one of the residents of the Red Cross homeless shelter in Velika Kosnica, near Zagreb. She is completely aware of her current situation, into which she landed as result of the combination of unfortunate life events and her own bad financial decisions. Anyone can end up in a situation such as hers, stresses Katarina. “It can happen to anyone. You need to accept your situation, whatever it is.”

“No matter who you were before, here in Kosnica we are all equals. And you need to accept that. Because if you don’t, you start spiraling down emotionally, and then other problems, such as alcohol abuse, follow.” Katarina had a job until recently and hopes to find work again and move out of the shelter. “All of our needs are fulfilled in here; we are provided with everything we need, but this is not a home. Losing hope and giving up is the worst option; it ruins you psychologically. So, you have to face the reality, take action and do your best to change your situation.”

Slavko, a man who lost his home and has been the shelter’s resident for two years now, agrees. “I’m trying to get away from here. Work and faith are the best tools for achieving that. The first year here was difficult; I felt ashamed and humiliated. But I managed to snap out of it. I have a job now and I believe I’ll manage to get out of here. If you quit trying, you get depressed very quickly,” stressed Slavko. “The decision to change your life has to come from you. There is no moving on without it and nobody else can make you change.”

After he became homeless, Slavko’s friends and, eventually, his family, gave up on him. “That was the hardest pill to swallow – my mother and sisters abandoning me. But I know I’ve disappointed them many times. I made many promises I didn’t keep and finally, I ended up in here. I realize now it was my own fault; no one else’s.”

It is important not to give up on your life because there is always someone there willing to lend a helping hand. However, asking for help is hard. “I was passive, lazy. But I’m aware of my situation now and I’m certain I’ll manage to get out of here. The solutions are out there, not in here.”

“It Was As If I Didn’t Exist; Like I Was Invisible…”

Describing what it is like to be homeless, Petar, Slavko’s friend says: “It was standing in the streets without anyone paying attention to you, walking around collecting empty plastic bottles to exchange for money and get some booze so you could make your day pass faster. Despair, depression, misery. People passed by me as if I wasn’t even there; as if I was invisible…”

Before taking refuge in the shelter, sleeping rough was Petar’s sad reality. “I lived in an abandoned factory, an abandoned house, an abandoned garage, an abandoned car. All I had were those ruins,” he says. “It’s hard for people to understand why a lot of the homeless waste all their money on the booze. But you have to understand; when you end up in that kind of a situation, when you hit rock bottom, food doesn’t matter. All you want is to make the time pass, and the alcohol helps.”

Petar managed to get hold of his life again the moment he faced the situation and stopped dwelling on the reasons that got him there. Talking about his wishes for the future, he says: “I want to be part of the society again, like I used to be when I had a job. To stop being alone and miserable.”

From living in the streets to reintegration – the path is difficult but achievable. The life story of Marko, Croatian war veteran is a case in point. “Soon after my deployment I started to drink and became an alcoholic. That led to me losing both my job as well as my home and hitting rock bottom.” Marko had spent nearly two decades homeless, which had affected his health. Ending up in hospital was his watershed moment. “When I got sick, I thought I was dying. That that was it. It really scared me; I realized I needed to take control over my life again.”

Following his hospitalization, he quit drinking, gradually managed to get off the streets, got accommodation in the shelter, and finally started getting in charge of his own life again. “I’m currently working for a friend and I’m feeling much better. I take lots of walks; I like doing that. Now I have everything I didn’t have before – my own home, a TV, a radio and, most importantly, a key to my apartment. It’s the best feeling in the world, opening the door to your own home and getting into your own bed.”

In all of these stories, there is a common thread: homelessness can happen to any one of us. It is crucial that the society does not ignore its homeless and instead to offer them an opportunity to get reintegrated into the fabric of the society once again.

*To protect the identity of our interlocutors, all of the names used in this text have been changed.