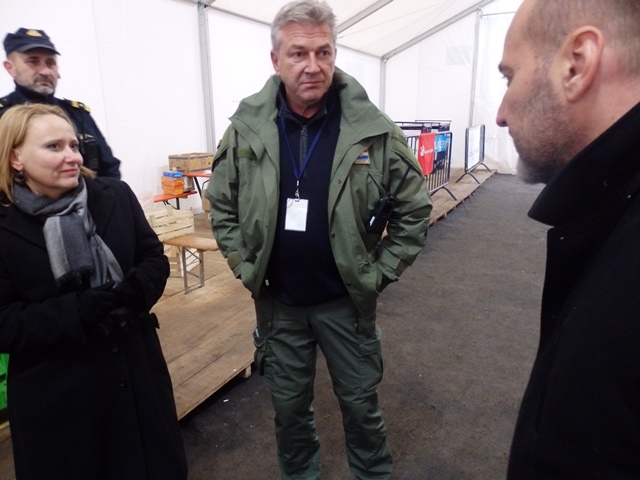 The aim of the joint visit was to monitor the accommodation conditions, the distribution of humanitarian aid as well as the organization of work in the centers. An efficient response for the refugee crisis cannot be supplied by a single state. It has to be provided through a joint action of the international community, which certainly cannot include raising fences or limiting the access to the asylum system based on one’s citizenship, emphasized Ombudswoman Vidović.

Following the visit to the Reception center in Šid Ombudsman Janković concluded that some of the conditions in the center do not meet even the minimal standards. “It is unacceptable to have toilets more fitting to the 12th century standards here, while at the same time having a wi-fi network,” said Janković, adding that the center was lacking in employees. Ombudsman Janković also stressed the fact that none of the refugees he had spoken to mentioned encountering any problems while transiting through Serbia.

Having monitored the process of the boarding of the refugees on a train at the Šid train station, undertaken jointly by the members of the Serbian and Croatian police force, Ombudswoman Vidović and Ombudsman Janković visited the Transitory Reception Center in Slavonski Brod, where they were joined by the Minister of the Interior of the Republic of Croatia, Ranko Ostojić.

“After the many challenges we have faced since the beginning of the refugee crisis in September, the conditions of stay of the refugees in Croatia are now at the level on which the refugees’ human rights are respected and proper care is provided to them,” stated Ombudswoman Vidović. The Ombudswoman emphasized the fact that since the very beginning of the crisis her Office has been divided into several teams, which have been paying daily and nightly visits to the spots where the refugees are located. “The Ministry of the Interior was willing to accept the recommendations we were issuing in the field,” said the Ombudswoman. Visibly pleased by what he has seen, Ombudsman Janković congratulated the Croatian state bodies, the Ombudswoman, the NGOs as well as the citizens for preserving the dignity of the refugees. “I haven’t seen a single sad face in Slavonski Brod. The conditions here are appropriate and the organization is at an exceptionally high level,” stated Ombudsman Janković, adding that he would make recommendations aimed at the competent bodies in Serbia following his visit to Croatia.

Today’s visit represents a continuation of the successful cooperation between the two ombudsman institutions, which they will continue to foster in the future as well.

Human rights situation in 2019 analysis and 133 recommendations for improvements