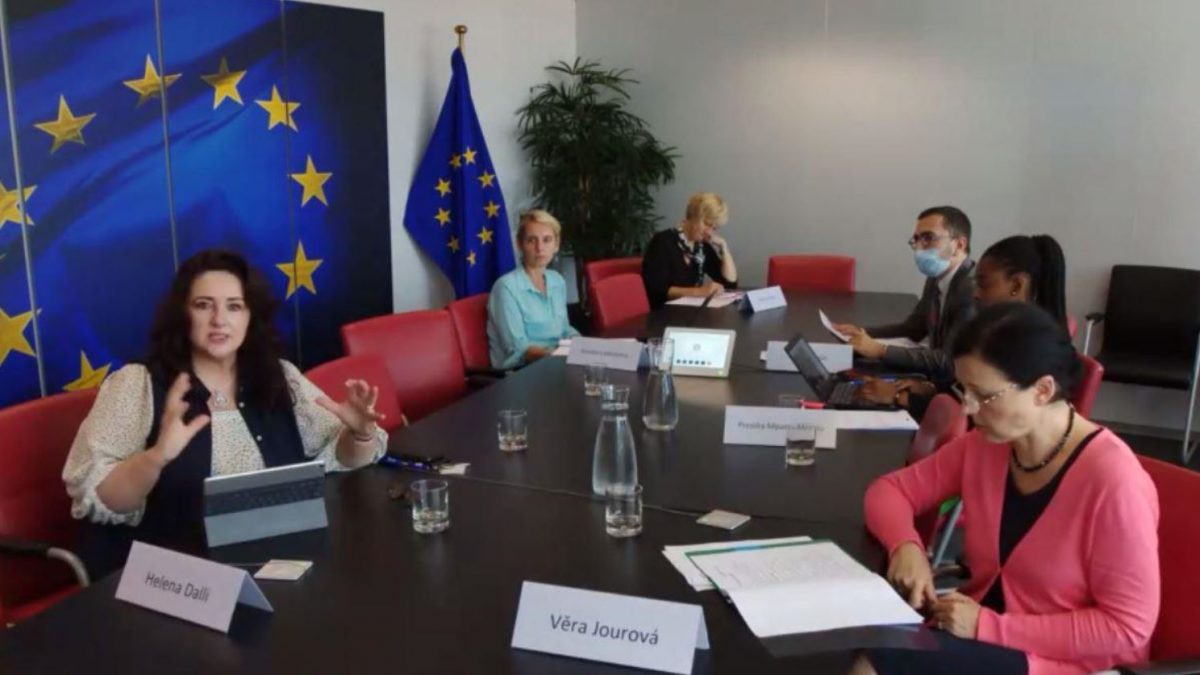 On 20th July consultation meeting of key EU stakeholders, including EU Commission Vice-President for Values and Transparency Věra Jourová and Commissioner for Equality Helena Dalli, was held on a new European Action Plan against Racism and Xenophobia. Tena Šimonović Einwalter contributed to the discussion with the Commission both as Deputy Ombudswoman and Equinet Chair, and other contributions were made by equality bodies from Belgium, France, Germany and Ireland and representatives from European NGOs.

Equality bodies are the cornerstones of the equality infrastructure in their countries. It is therefore of pivotal importance to ensure that they can effectively fulfill all their functions, contribute to positive change in societies and meet the expectations of society at large and vulnerable groups in particular. Strengthening equality bodies should include granting them a strong mandate (covering also hate speech), all necessary powers, full independence, adequate resources and accessibility. Ensuring equality bodies’ full independence, effectiveness and accessibility is particularly important in light of the high levels of under-reporting of discrimination cases, in particular on the ground of race and ethnic origin.

Encourage and enhance the use of targeted action, including positive action measures, to achieve substantive equality in practice

In order to plan these targeted measures, enhance the collection of equality data.

Racial (or racialised) and ethnic minorities have been discriminated across Europe and throughout history. Ensuring formal equality or equality of treatment is insufficient to overcome and compensate such historical disadvantages. While positive action is possible under all EU equal treatment directives, the use of this tool is not widespread enough to lead to tangible improvements in the situation and experiences of racial and ethnic minorities. An important part of the problem is the lack of sufficiently detailed equality data to allow for adequate identification, targeting and design of positive action measures. It is necessary to overcome the false dilemma presented as the right to privacy and data protection prohibiting the collection of equality data even in an anonymised manner.

Enhance the use of statutory equality duties, with a view to addressing systemic and institutional discrimination against racial and ethnic minorities

Equality duties are introduced in a growing number of Member States to go beyond formal approaches to equality and the guaranteeing of equal treatment. Equinet’s research on the topic found that equality duties include preventive duties requiring organisations to establish systems and processes to prevent discrimination, institutional duties requiring organisations to establish systems and processes to promote equality for employees and service users, and mainstreaming duties requiring public authorities to have due regard to the need to promote equality in legislating, budgeting, regulating, and policy making, with an aim to achieve full equality in practice in all their actions. This should also include the widespread use of equality impact assessments.

Mainstreaming duties and rigorous equality impact assessments required from all public authorities can also go a long way in addressing systemic and institutional discrimination and racism.

The discussion is a part of the Commission’s process in the development of the upcoming action plan to tackle racism and xenophobia, and more similar sessions will follow.