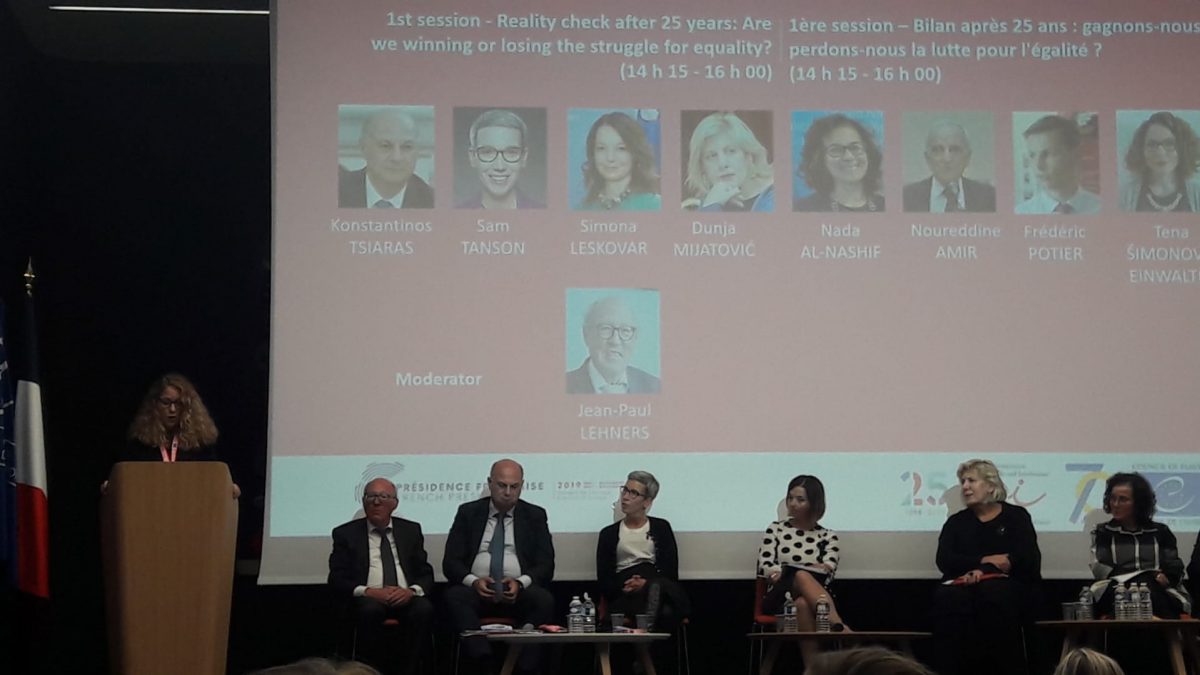 Promoting equality and combating racism and intolerance are crucial for Europe’s future. The efforts already made towards greater equality have improved the living conditions of many Europeans, fostered more inclusive societies and contributed to safeguarding stability, peace and security in Europe. A significant role in promoting these values belongs to European Commission against Racism and Intolerance (ECRI), and this year marks the 25th anniversary of this human rights monitoring body. The celebration coincides with the 70th anniversary of the establishment of the Council of Europe.

To honour this anniversary, on September 26th and 27th 2019, with the goal of consolidating the future contributions of member states and ECRI in this expanding field, Paris hosted a special conference under the French Chairmanship of the Council of Europe Committee of Ministers. The conference gathered Europe’s leading experts in the field of combatting discrimination and inequality, including Deputy Ombudswoman Tena Šimonović Einwalter, who is also Chair of the Executive Board of Equinet (European Network of Equality Bodies) and the Croatian representative in ECRI. Alongside an overview of many accomplishments and challenges that ECRI has faced over the last 25 years, the conference examined the leading trends in the area of equality and fight against racism and intolerance, focusing on the inclusion to society of persons exposed to racism and intolerance on account of their affiliation, real or presumed, to a group, and the management of the opportunities and risks – including the spread of hate speech – that new technologies and the Internet bring with regard to equality, racism, intolerance and discrimination.

Deputy Ombudswoman ŠImonović Einwalte spoke within the panel discussion “Reality check after 25 years: Are we winning or losing the struggle for equality?“, providing a detailed answer to the theme question. Even though it sometimes seems that we are losing this battle, it is important to take note of the many advances that happened over the last 25 years and commit to working with even more efficiency in the future. Commenting on the current situation in Europe, she stated that the amount of online hate speech is frightening, which encourages hate crimes, while discrimination based on various grounds is, unfortunately, still very much present. Equality as a value is being reduced and impaired, and after a decade of improvements, we are now facing not only stagnation, but deepening of intolerance and inequality, especially in relation to increased xenophobia and discrimination towards migrants.

Using the example of a Roma child, Šimonović Einwalter illustrated how separating the fight against racial or ethnic discrimination from the fight against poverty, can hardly give positive results. Critically reflecting on the situation, she remarked that the system that was built to combat discrimination on all levels – international, European or national – is too complex, too expensive and too distant from the citizens, while the implementation of the acts, policies or recommendations in this area remains the biggest obstacle, making any real changes difficult. She also noted how, in front of everyone present there, but also all other stakeholders in the fight against discrimination, there is a challenge to become even better and more efficient, in order to reach the full potential, the anti-discrimination legislative, public policies and equality bodies. Old issues, such as racism, xenophobia, antisemitism or intolerance, are undermining the very foundation of a prosperous and inclusive Europe, while the new issues are placing some new challenges ahead of us. Key to successfully overcoming all these challenges, Šimonović Einwalter concluded, is in the effective implementation and even more efficient and close cooperation of all stakeholders working on achieving equality in Europe – NGOs, equality bodies, ECRI and all other European and international allies. Furthermore, without cooperation with representatives of states and governments, whose political will and decisions are crucial, there will not be any effective response to old issues, but also to new challenges in the field.