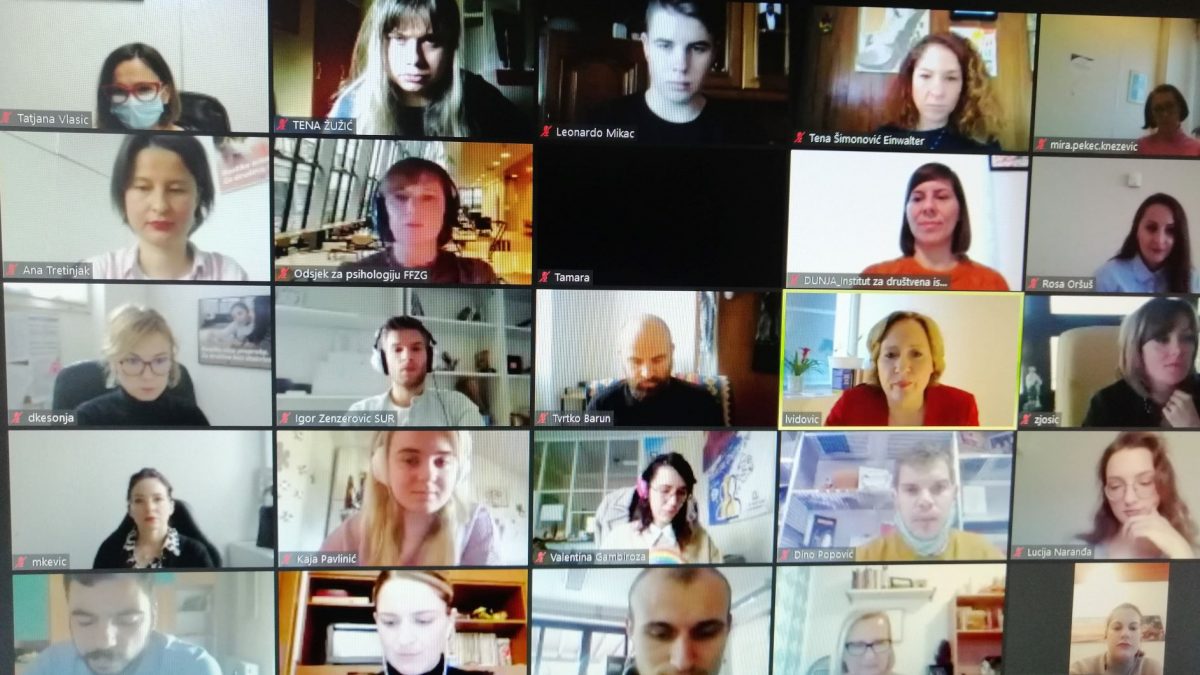 It is important to include young people in decision-making processes and to let their voices be heard, but also to provide them with human rights education to enable them to both protect human rights and to react to the phenomena incompatible with democratic societies, such as hate and intolerance, stressed Ombudswoman Lora Vidović in the online discussion on the needs, issues and potentials of young people held today by the Office of the Ombudswoman in the run-up to the International Tolerance Day.

The COVID-19 epidemic has additionally exacerbated the problems this group faces and on which the Ombudswoman has reported for years to the Croatian Parliament: the state’s educational policy is not harmonised with the employers’ needs, the growing flexibilisation of the labour market and the increase in the precarious forms of employment disproportionately affect young people, their experiences with employment selection processes give rise to suspicion of nepotism and corruption. Additionally, they face various types of prejudice due to their age, lower educational level, being unemployed or belonging to national minorities, as well their sexual orientation/gender identity or expression.

Rosa Oršuš, a public administration student, has been facing prejudice her entire life: “I am experiencing multiple discrimination – because I am young, a woman and also Roma. When I started the university, I thought things would be different – until I attempted to find a job.” Despite fulfilling all of the set conditions, she was rejected even by the companies that were looking to employ large numbers of people and the COVID-19 epidemic has only amplified her fears related to her employment prospects after her graduation. Leonardo Mikac, a volunteer for the NGO Zagreb Pride, is currently undergoing transition. The process has been additionally complicated during the pandemic – a situation affecting every aspect of his life. “I feel like a human informational leaflet due to the fact that I have to explain to every new employer all of the details of this procedure that the epidemic has additionally slowed down. To illustrate, the competent body hasn’t issued its opinion in the last 7 months and it was supposed to do it within 30 days”, explains Leonardo.

The labour market does not favour young people, regardless of which of the groups they belong to. Also, the employers are slow to hire them due to a belief that they lack the necessary experience and cannot contribute to the growth of the company, which is far from the truth, warned Kaja Pavlinić, an activist from the organisation Croatian Youth Network. “We are expected to have 25 years of work experience at the age of 24.” Young people are not eager to emigrate and do not reach that decision easily, but are sometimes forced to: “We can assist them by teaching them about their rights, informing them about who they can contact for help, as well as encouraging them to join the civil society sector which plays an important role”, she added.

However, instead of providing support, the society continually imposes on young people the pressure to succeed at the same time they have to deal with other important life “tasks” such as identity formation, developing their professional roles and finding a partner. That type of pressure has a negative impact on their mental health. Thus, they need to be provided with

both psychological support, as well help in developing their emotional “literacy”, stressed professor Gordana Kuterovac Jagodić, lecturer at the University of Zagreb’s Faculty of Humanities and Social Sciences. Today’s generation of young people were raised under the motto “don’t rock the boat”. In order to be able to drive social change they should be progressive, creative and innovative, but they lack the wider social support to do that, commented Dunja Potočnik, researcher at the Institute for Social Research. All of the participants agreed on the importance of conducting civic education and of educating young people on the topics of human rights and tolerance. Hate speech and discrimination need to be suppressed and youth policies have to be based on research, underscored Tena Šimonović Einwalter, Deputy Ombudswoman and member of Council of Europe’s European Commission against Racism and Intolerance.

According to state secretary at the Central State Administration Office for the Demography and Youth, the best way to activate young people is to include them in the activities of civil society organisations, important partners to the state in the processes of developing tolerance, understanding and dialogue. “As a State Office, we cannot do much on our own, which is why we need to adopt an “aggressive” approach towards other state institutions”, Mrs. Josić said.

This was our second event in the series titled #KavaZaLjudskaPrava (CoffeeForHuman Rights), following the one dedicated to the impact of the COVID-19 pandemic on the rights of the most vulnerable social groups. The recording of the discussion is available on our official YouTube channel (in Croatian).

“30 Years of Human Rights Protection in the Republic of Croatia: Past, Present and Future”