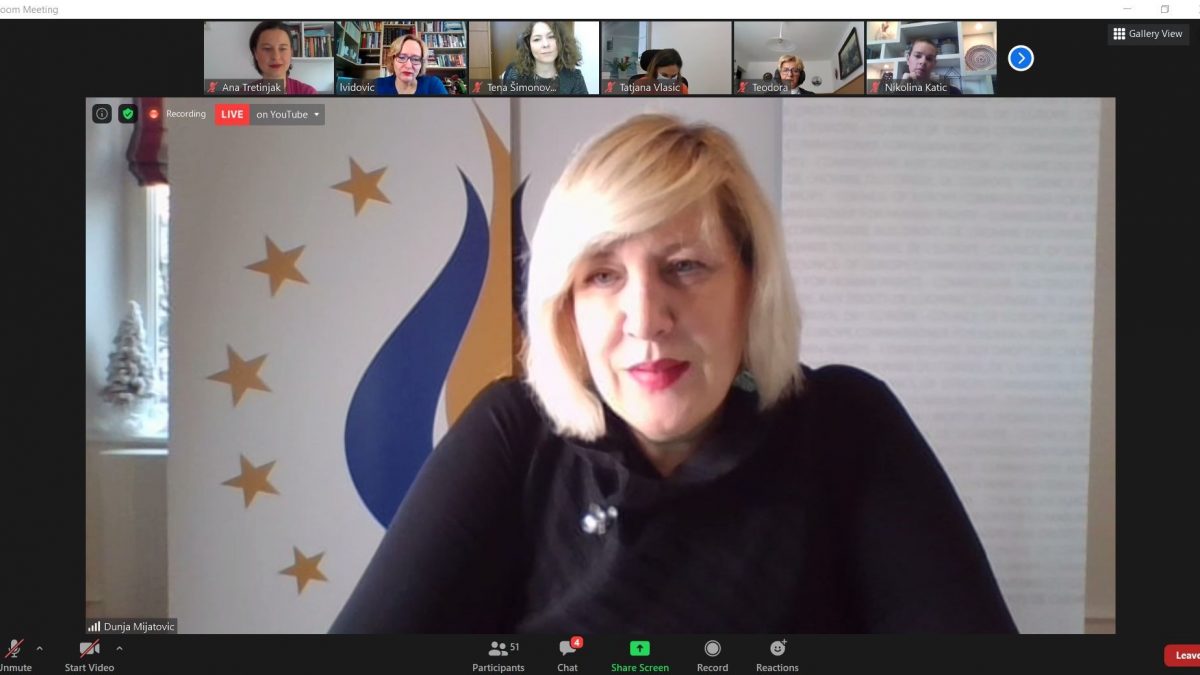 The year behind us has demonstrated that an efficient human rights protection system is a necessary precondition for the actual protection of the vulnerable groups in times of crises.

In the last of our online events in the series titled #KavaZaLjudskaPrava (CoffeForHumanRighs) Ombudswoman Lora Vidović spoke to Council of Europe Human Rights Commissioner Dunja Mijatović. Although our current situation is an extremely demanding and difficult one, it is important for us to learn the lessons which will help us build a stronger and a more just society, more resilient to similar challenges in the future. “I hope everything we have learned during the crisis will be imbedded into the actual policies. We can also see how extremely important it is to invest into the public health system and to not weaken it in favour of the private health service providers,” Ombudswoman Vidović said.

The pandemic has affected all of the vulnerable groups and has highlighted the problems human rights institutions and defenders have been warning about: “The poor have become poorer and those that have already been marginalised in the society have become even more so,” Commissioner Mijatović warned. It has contributed to a rise in domestic violence cases and to additional threats to the rights of older persons, persons with disabilities, women, children, members of national minorities. It has exposed all of the shortcomings of the human rights protection systems. At the same time, the fact that the pandemic has had an intense effect on everyone and not only the members of the vulnerable groups has contributed to a growing awareness of many citizens in many countries of the universal value of human rights.

“Many of the countries were not prepared for all of the challenges they were faced with. The mistakes that occurred ought to serve as guidelines to all of the governments and institutions, including international organisations, for more successful dealing with the future situations,” noted Mijatović.

In the discussion, Deputy Prime Minister, Boris Milošević emphasised the especially precarious position of the vulnerable groups as well as the dangers resulting from the spreading of false information. Speaking about the measures undertaken by the governments with the aim of the protection of human lives, he stressed that they need to be proportionate, nondiscriminatory and of a limited duration.

Speaking about the measures undertaken in the period of the pandemic, Mijatović said that certain countries used the Coronavirus related crisis to pass legislation regulating the topics unrelated to the crisis that actually further endangers human rights. She stressed that the co-operation with the national institutions for human rights protection is necessary for the accomplishment of the true protection of those in the most precarious situation and for the achievement of concrete results in the field.

we will only encounter in the future not realizing that it has already become part of our everyday lives. We need to reach a balance between the advantages and the potential risks of the utilisation of AI and the answer to that question lies in the education of the citizens and the necessary involvement of the academic community, Commissioner Mijatović added.

Vesna Crnić Grotić, the Dean of the University of Rijeka’s Faculty of Law and head of the Council of Europe’s Committee of Experts of the European Charter for Regional or Minority Languages, stressed the problem of the inadequate provision of education in minority languages, especially when it comes to online classes and those provided via television.

Additionally, Commissioner Mijatović spoke about topics such as mandatory wearing of face masks, the rights of persons with disabilities and members of the Roma community as well as about the allegations of violence against the migrants. Discussing the last point, she stressed that this is a problem encountered by other countries along the EU’s external borders such as Spain, Italy and Greece and that all of the allegations need to be adequately investigated. It is precisely the manner in which we deal with this problem that will determine how Europe will function 20 years from now – either as “fortress Europe” without access to the people coming from outside of its borders or as true Europe that demonstrates the respect for human rights and signals to everyone that it is a continent making an effort to enable all of its citizens to exercise equal rights, she added. In doing that, Europe must be guided by international human rights standards and not by politics, emphasised Ombudswoman Vidović.

The civil society played an extremely important role during the pandemic as well. However, in many of the countries human rights advocates, including journalists, were targeted while doing their jobs. National human rights institutions and equality bodies need to be additionally strengthened, as well as their co-operation with the governments, while the experiences acquired in the period of the pandemic must be utilised for the creation of concrete policies and tools that will enable us to be prepared for the future challenges. “The states play the key role in ensuring a safe environment for the functioning of the civil society and all those engaged in human rights protection. A government cannot be considered successful, democratic and contemporary without independent institutions provided with an opportunity to perform their functions without obstacles,” Commissioner Mijatović concluded. The recording of the discussion can be accessed in its entirety (in the Croatian language) on our official Youtube channel.