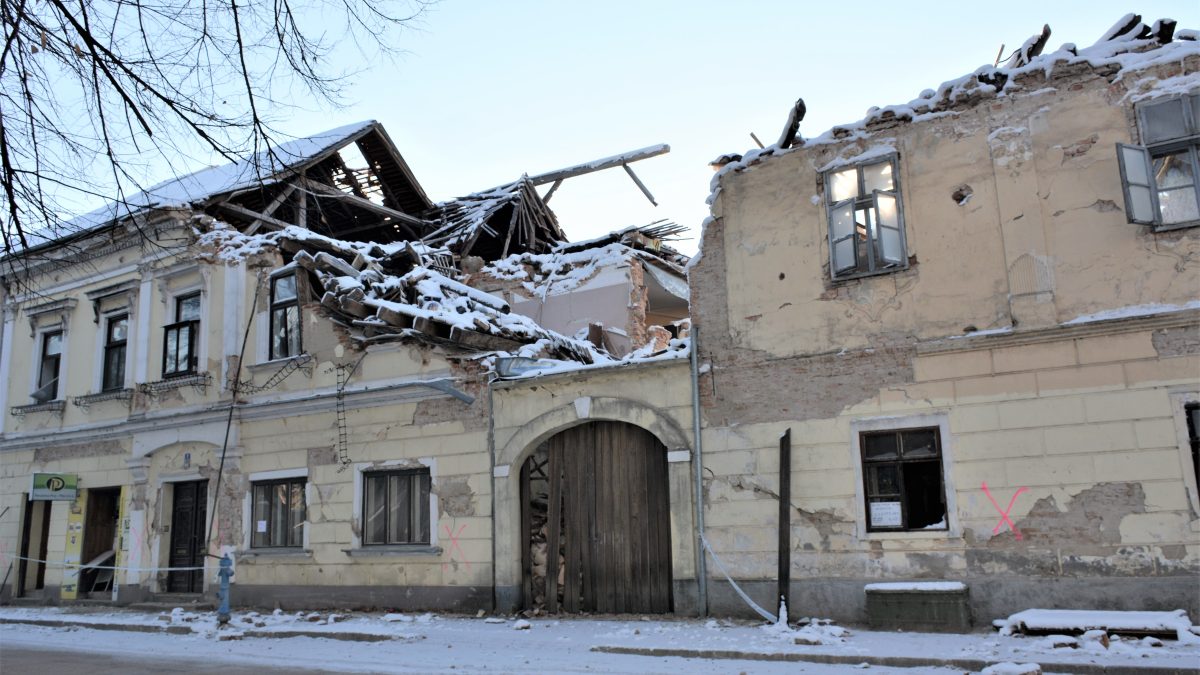 The devastating earthquakes with the magnitudes of 5.0 and 6.2 on the Richter scale and the epicentre near the town of Petrinja that struck several Croatian counties on 28 and 29 December 2020 left 7 people dead and dozens injured and damaged thousands of buildings to the point of destruction. Numerous citizens who lost their homes were provided with temporary accommodation, a number of them with housing containers and mobile homes placed next to their ravaged homes, and some are still waiting for alternative housing. Many institutions and businesses had to evacuate from their premises, which has impacted their work and the accessibility of their services.

A week after these events the Government declared the state of catastrophe for the Sisak-Moslavina and parts of the Zagreb and Karlovac Counties and submitted to the Parliament the Draft Bill on the Amendments to the Act on the Reconstruction of Buildings Damaged by the Earthquake in the City of Zagreb and the Krapina-Zagorje and the Zagreb Counties to be passed under urgent procedure. The Act is intended to provide the normative framework for the reconstruction of buildings and provision of housing in these counties, as well as for the reparation of any additional damage occurring in the areas that had already been hit by the March 2020 earthquake.

As we suggested in our comments submitted to the Legislation, Labor, Retirement System and Social Partnership Parliamentary Committees, in order to ensure the fastest possible recovery and development of the earthquake-stricken areas, the normative framework in question needs to be precise and just.

Due to the fact that the towns and villages affected by the December earthquakes are mostly located in the state-supported areas, the state should provide all of the necessary funding and workforce so that these areas could not only get through the acute survival and rescue phase, but also achieve revitalisation and development in the future. The Draft Bill is expected to contribute to these goals since it envisages the full state financing of the reconstruction.

The question has been raised, however, whether the citizens who reside outside of the state-supported areas and do not fulfil the conditions for the complete state financing, as set out by Article 6 of the Draft Bill, will be able to afford the coverage of 20% of the costs of the reconstruction and rebuilding of their structures. The Draft Bill’s argumentation does not include any financial data on the population it is intended to apply to that would justify the solutions it suggests. Thus, it is unclear whether it actually upholds the principle of justness, which it most definitely should.

The Act should also clearly prescribe whether it is necessary to obtain the owner’s prior permission in cases of removal, based on the decision by the competent authority and in line with the Civil Protection Act, of the destroyed family homes or buildings that represent immediate danger for human health and safety.

A large number of affected persons have been accommodated in temporary objects with electricity-powered heating systems. Since many of them are either without any income or live off of modest social benefits, due to the fear of raking up the bills, they often choose not to use the heating. To remedy this, the Government has instructed the national power supply company to provide electricity free of charge to the residents of the affected areas of Sisak-Moslavina, Zagreb and Karlovac Counties in the period from January to March 2021. This matter, however, needs to be legally regulated. It is important to establish the duty of the state, i.e. the state-owned companies, in all cases of natural disasters or earthquakes to cover utility costs for all persons whose homes have been rendered unusable or temporarily unusable and/or they have been housed in temporary accommodation. The citizens should be able to have the access to this benefit based on the records compiled by the civil protection headquarters and without a requirement for individually submitted requests. The appropriate legal regulation is necessary both in order to achieve legal certainty, but also in order for the provisions of this Act to be appropriately applied in the future.

Finally, the procedures related to submissions of requests for reconstruction need to be as simple and efficient as possible. The competent authorities should obtain as much of the required documentation as possible from the public records and the Ministry of Physical Planning, Construction and State Assets (i.e. the Reconstruction Fund and the Central State Office for Reconstruction and Housing) should organise mobile teams with the aim of providing on-the-spot legal aid to the citizens of the affected areas.