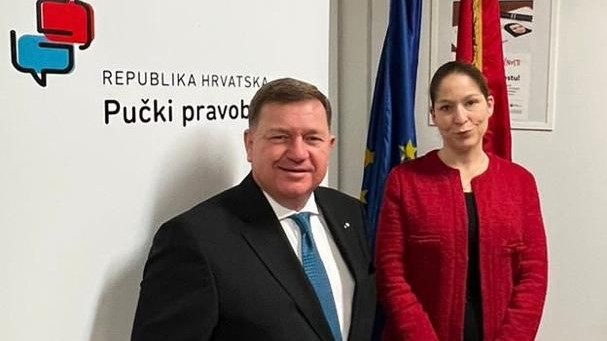 In the past two years the pandemic has put the citizens, especially members of the already vulnerable groups, in extremely challenging situations. Ensuring uninhibited access to public services and protecting the vulnerable individuals and groups has, thus, been the main focus of ombudsman institutions worldwide.

On 20 January 2022 the Office of the Ombudswoman was visited by the Secretary General of the International Ombudsman Institute – IOI and Austrian Ombudsman Werner Amon and IOI’s Executive Director Meinhard Friedl. The IOI was founded in 1978 and is the only global network of ombudsman institutions, gathering over 200 members from over 100 countries from all around the world. Its work encompasses all of the world’s regions and is focused on regional and global cooperation between its members, as well as the facilitation of knowledge and information exchange.

Mr. Amon and Mr. Friedl were received by Ombudswoman Tena Šimonović Einwalter and Deputy Ombudswoman Tatjana Vlašić, with whom they discussed the challenges faced by the multimandate ombudsman institutions (i.e., those being in charge with more than one mandate and de facto functioning as several institutions merged into one), as well as the impact of the current pandemic on the human rights of the citizens and the functioning of the ombudsman institutions worldwide.

Multimandate institutions are specific in that they can encounter certain unique challenges, such as broadening of their mandates without being provided with additional staff and resources. Thus, engaging in regular bilateral cooperation and exchanges of information, knowledge and best practices represent both a learning opportunity and a chance to strengthen one’s capacities. When it comes to mandates, the Austrian Ombudsman Board is in charge of three – handling maladministration, human rights promotion and protection as well as acting as the National Preventive Mechanism for the prevention of torture and other cruel or inhuman treatment or punishment (NPM). The Ombudswoman of the Republic of Croatia has been entrusted with five – those already mentioned, as well as that of the national equality body and the external mechanism for the reporting of irregularities under the Whistleblower Protection Act.

More information on our various mandates is available here.

Ombudswoman’s reaction to the Civil Service Act Proposal and its possible negative impact on the independence and quality of administrative work – February 27th, 2014