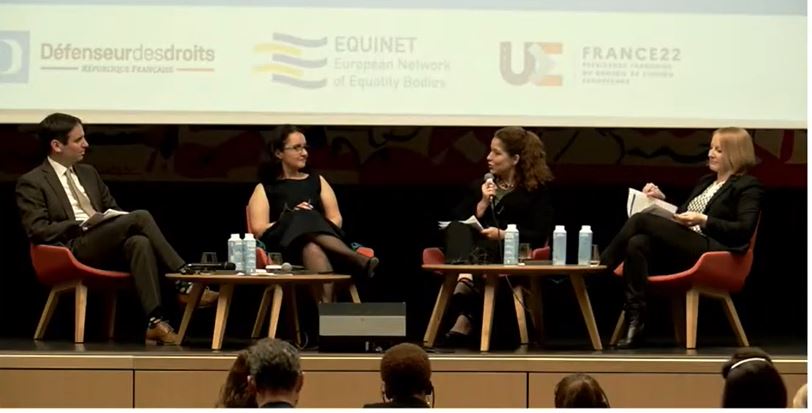 Ombudswoman Tena Šimonović Einwalter presented our institution’s best practices in the systemic suppression of discrimination at the conference organized on 2 June 2022 by the European Network of Equality Bodies (Equinet) and the French national equality body, the Defender of Rights, within the Framework of the French Presidency of the European Union.

The event titled “Tackling discrimination in Europe: How National Equality Bodies can rise to the challenge” included participants from the European Commission and other experts in the area of combatting discrimination.

Ombudswoman Šimonović Einwalter was invited to share best practices in the systemic suppression of discrimination, recognized as such at the European level, from our institution’s work as the national equality body. The examples included the organization of training sessions for numerous stakeholders, including judges, state attorneys, attorneys, civil servants, law enforcement officers, trade union representatives and university students, conducting analyses of case law in discrimination cases, undertaking research on the public perception and the incidences of discrimination, monitoring the levels and incidences of discrimination in the country and reporting to the Croatian Parliament, and other activities.

The basis for the efficient suppression of discrimination certainly lies in its timely identification, the ability and the willingness of the victims to seek protection, the processing of the perpetrators, but also in prevention and precluding discrimination from taking place. The latter requires awareness raising among a wide variety of stakeholders, including the citizens.

Another important tool in the prevention of unequal treatment is the monitoring of the implementation of equality bodies’ recommendations. In that, distinction needs to be made between the recommendations resulting from investigations procedures in individual (potential) discrimination cases and those addressed to the competent bodies in the ombudswoman’s annual report to the Croatian Parliament and aimed at systemic prevention and suppression of discrimination.

Furthermore, by monitoring the case law in antidiscrimination cases and analyzing court decisions and their implementation of the antidiscrimination legal framework (the analyses are featured in our annual reports to the Croatian Parliament), our institution aims to contribute to antidiscrimination claims based on the sound normative and factual reasoning, which is, then, the precondition for the normatively well grounded and well explained court rulings that will be used as precedents in the future court and out-of-court proceedings.

The recording of the event is available here.

Lessons learned from the fire season?