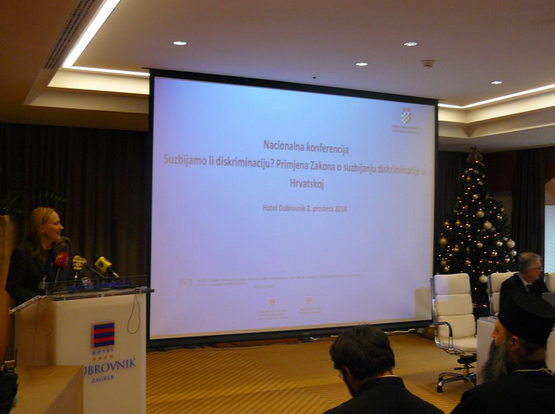 was held with the purpose of considering and analyzing the application of Anti-Discrimination Act during the past period and it gathered experts in the field of combating discrimination: judges, lawyers, r

The conference took place in four thematic sessions which succeeded welcoming speeches by the Ombudswoman, Ms. Lora Vidović, the Head of Government Office for Human Rights and Rights of National Minorities, Mr. Branko Sočanac, Deputy Minister of Justice, Ms. Sandra Artuković Kunšt and the President of the Supreme Court, Mr. Branko Hrvatin. The cover topics were addressed by experts, representatives of institutions deeply involved in the implementation of the Act, i.e. agents who, along with the direct application of the Act, are dealing with anti-discrimination by raising public awareness about discrimination as legally forbidden conduct and by activism.epresentatives of independent and government bodies, civil society organizations and academia.

IV. session entitled “Role of the Media in Combating Discrimination and Promoting Equality” was moderated by Mr. Enes Kulenović, Assistant Professor, Faculty of Political Sciences in Zagreb. Mr. Zdenko Duka, the President of the Croatian Journalists’ Association, spoke about freedom of speech and hate speech in terms of protection against discrimination. Ms. Gordana Vilović, Associate Professor at Faculty of Political Science of University of Zagreb, opened to question with her presentation whether the media recognize discrimination by presenting the analysis of discriminatory speech in the media, and Ms. Mirjana Rakić, the President of the Electronic Media Council and the Director of the Agency for Electronic Media, presented the role of the Council and the Agency for Electronic Media.

The need for wider change of the Act permeated most of the presentations. Greater visibility of ombudsman institutions was also highlighted as necessary to increase the efficiency of the whole system. Large disproportion between the available statistics and the perception of discrimination demonstrated by research conducted so far, indicate there is a trend of under- reporting discrimination. Lengthy court proceedings, secondary victimization of victims and public displays of unacceptable attitudes of precisely those stakeholders that are crucial for the protection of victims are just some of the factors that influence the formation of the trend of inadequate discrimination reporting. In addition to the progress made, it was concluded that additional efforts needed to be made which would, in a critical and constructive environment, result in improvement of a comprehensive system for combating discrimination.