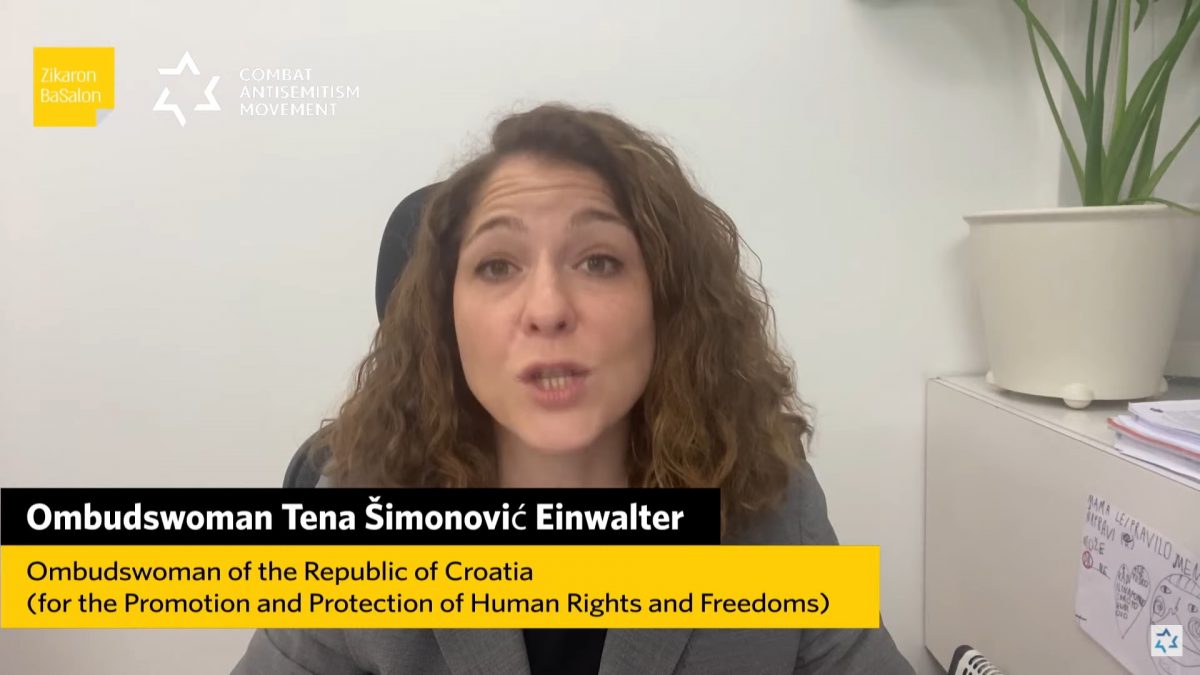 On the occasion of the Israel’s Holocaust Remembrance Day (Yom HaShoah) Ombudswoman Tena Šimonović Einwalter took part in a global online event organized on 27 and 28 April 2022 by the Combat Antisemitism Movement (CAM) and the Zikaron BaSalon initiative.

This unique event was conceptualized as an online conversation with the last generation of Holocaust survivors, bringing them into the “living rooms” around the world, while also featuring dedicated messages from decision makers and opinion-shapers from around the world.

During a ten-hour broadcast the viewers got a chance to ask questions to survivors from five different countries – Ellen Bottner (U.S.), Luis Opatowsky (Mexico), Abraham Goldberg (Australia), Hannah Gofrit (Israel) and Zofia Radzikowska (Poland) – about their experiences during and after the Holocaust.

Croatia, set to chair the International Holocaust Remembrance Alliance (IHRA) in 2023, was represented by Ombudswoman Tena Šimonović Einwalter, who took the opportunity to stress the importance of education on the Holocaust – the suffering it caused, the dangers of the propaganda and the hate speech that preceded it, as well as the cruelty human beings are capable of committing against one another. “We must provide the future generations with the education on human rights, equality and solidarity and on the dangers of fostering stereotypes, prejudice and hatred,” underscored the Ombudswoman. Events like this are extremely important, she emphasized, in the period we are currently living in, rife with hate speech, “fake news” and Holocaust denial and relativization, providing the opportunity for us to record the testimonies of the last generation of the Holocaust survivors – a crucial element in the education of the generations to come, and to witness their memories and life stories.

We invite everyone to join the event, taking place from Australia to New York, bringing powerful testimonies of Holocaust survivors. All participant have the opportunity to ask them questions : https://t.co/fqS93vM9Ec #HolocaustRemembranceDay #YomHashoah