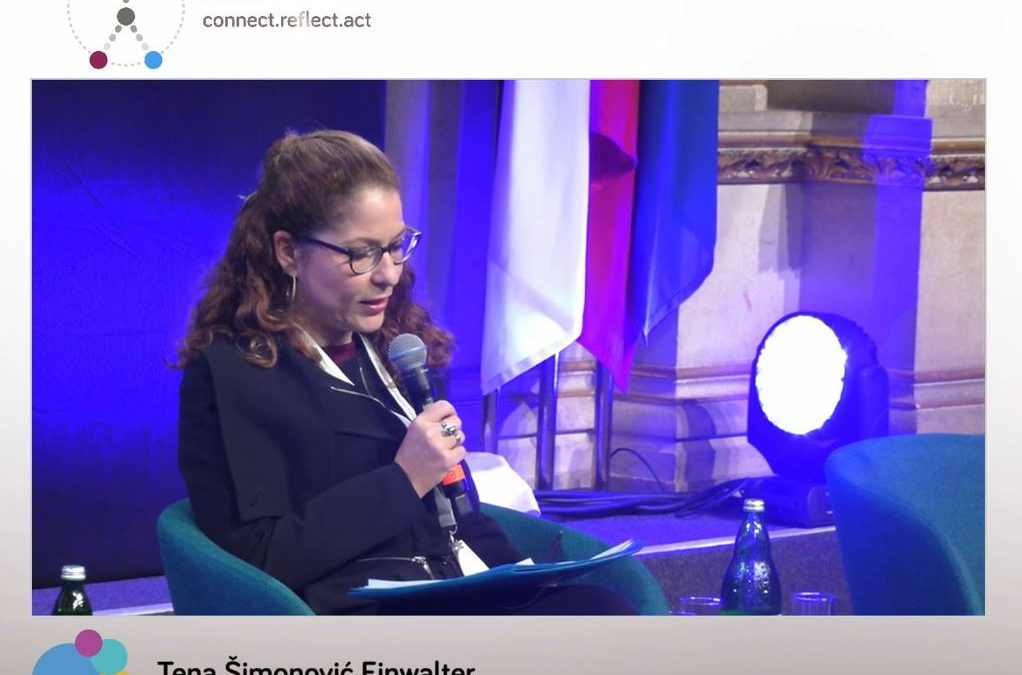 More than 3 000 participants took part in this year’s Fundamental Rights Forum. The Office of the Ombudswoman showcased the initiative jointly undertaken by our institution and members of Croatia’s Roma community with the aim of combating discrimination against the Roma as an example of good practice.

Organized by the EU Fundamental Rights Agency (FRA) , on 11 and 12 October 2021 the largest regional human rights event – the Fundamental Rights Forum – took place in several physical locations, including the Vienna City Hall and the cities of Strasbourg, Geneva, Warsaw, Ljubljana and Oslo, as well as online, gathering more than 3000 participants, 500 speakers and 145 events with the aim of discussing the contemporary human rights challenges in Europe.

Ombudswoman of the Republic of Croatia and Equinet’s Executive Board member Tena Šimonović Einwalter presented in the panel titled “The power of community: together for equality & human rights” our institution’s initiative aimed at combating discrimination against our country’s Roma community by strengthening the cooperation with the members of this national minority. The panel was jointly organized by Equinet and the European Network of National Human Rights Institutions (ENNHRI).

Cooperation with the Roma Community – Example of Good Practice

Our initiative was showcased as an example of good practice in the antidiscrimination field and was selected among a number of projects run by European National Equality Bodies and National Human Rights Institutions. Our cooperation with the Croatian Roma communities harks back to 2008 and was motivated by a large discrepancy between the official records on discrimination against the Roma on the one hand and a very modest number of complaints submitted to our institution by its members on the other. We responded to the situation by undertaking field visits to the Roma villages in various parts of the country and speaking to their inhabitants, thus gaining direct insight into the issues they were facing. Roma mediators – the Roma MP in the Croatian Parliament, the staff of the Government Office for Human Rights and the Rights of National Minorities, the county and the local Roma minority councils as well as NGO representatives played an important role in the organization of the visits.

These activities have enabled us to gain a better insight into the true needs of the Roma communities, resulted in an increase in the number of complaints submitted to us, and have helped raise the awareness of our institution as the National Equality Body and as the contact point between the Roma communities and other stakeholders. Additionally, they have fostered a better knowledge of the Roma communities on the mechanisms they can utilize to get protection against discrimination and have increased their trust in our institution. The latter is especially important since it affects one’s readiness to report discrimination and, thus, the possibility to receive protection.

Importance of Cooperation, Solidarity and Community

Along with Ombudswoman Šimonović Einwalter, the panel’s speakers included Berber Biala-Hettinga, Amnesty International’s human rights advocacy expert, and Monika Ladmanova, council to the EU Commission’s Vice president Vera Jourova. Biala-Hettinga presented two examples of good practice of cooperation between human rights stakeholders, one coming from Denmark and the other from Poland. The Danish example involves a joint campaign organized by NGOs, the Danish National Human Rights Institution, state authorities and the media around the topic of sexual violence, resulting in the amended definition of rape in the Danish Criminal Code, concrete recommendations aimed at supporting the victims as well as a better public awareness and challenging the prevailing stereotypes about rape. In Poland, on the other hand, various stakeholder, such as NGOs, the academia, the media, independent institutions and others gathered around the topic of the rule of law and the challenges it was facing in Poland.  The cooperation extended even beyond the country’s borders when the judges from 20 European countries expressed their support for their Polish counterparts during their protest against the measures introduced as part of the reform of the judiciary in 2020. Biala-Hettinga underscored the need for an EU-wide civil society strategy, which should recognize and support the role of the civil society, facilitate its effective functioning, monitor and analyze the challenges it is facing and offer protection against threats, including legal action in cases of threats to the functioning of the NGO sector and to the fundamental freedoms.

“It is obvious from the Danish example how the civil society, human rights defenders, independent institutions and the state authorities, each within their purview, can work together to foster positive change. In the Polish example, the cooperation between the variety of stakeholders and the support from the Polish Ombudsman and the judges from other EU countries send a strong message of European unity,” noted Ombudswoman Šimonović Einwalter.

Ladmanova underscored the support extended by the Commission to the National Human Rights Institutions and the civil society sector, i.e. to their activities aimed at the promotion and protection of human rights and the rule of law. This support is reflected, among other strategic documents, in the EU Strategy to Strengthen the Application of the EU Charter of Fundamental Rights, adopted in 2020 with the aim of providing a roadmap to both the Commission as well as the member states in the protection of the human rights enshrined in the Charter. Neither the human rights of the EU citizens nor their protection are up for debate. However, due to significant social changes taking place in the 20 years since the Charter’s adoption, it is necessary to devise new modes to protect them, adapted to the challenges human rights are faced with today. In line with that, the document puts the focus on the strengthening of the position of the human rights defenders and the civil society, for example by envisaging stronger financial support for them via the Citizens, Equality, Rights and Values Program (CERV).

Additionally, the Commission is planning the adoption of a normative framework aimed at the suppression of the so-called SLAPP lawsuits, i.e. “strategic lawsuits against public participation”, used lately in some of the members states to indirectly influence media freedoms. This move could result in better protection of human rights defenders. However, one of the most significant modes of Commission’s support and protection of the independent institutions is the revision of the existing and the adoption of the new legal standards for equality bodies, i.e. the standards aimed at harmonizing the practices related to equality bodies in the EU member states and defining clear and binding criteria with the aim of enabling their efficient functioning.

The Commission’s commitment to these goals is reflected in its initiative the “New Push for Democracy”. In the era of numerous political challenges, the document represents an attempt to additionally strengthen the civil society sector, seen as the basis of all democratic societies and the EU at large. During the mandate of the Commission’s Vice president and its Commissioner for Values and Transparency Vera Jourova the emphasis is being placed on those topics and they are also part of the Action Plan for European Democracy adopted in 2020, Ladmanova emphasized. This initiative includes the Conference on the Future of Europe as one of its instruments, intended to allow all EU citizens to participate in the discussion on the EU’s challenges and priorities in many areas, which will then steer the Commission’s actions within its mandates.

“The examples showcased here show that cooperation, solidarity and community are the building blocks of the strong communities and should always be in our focus. Building the bridges between all of the actors involved in human rights protection and combating inequality, mutual support, information exchange and acting preventatively, along with clear standards guiding the work of the independent institutions and the availability of sufficient resources for their functioning – that is what we have to achieve together. That is the only way we can efficiently protect those whose human rights are being violated and who are exposed to discrimination,” concluded Ombudswoman Šimonović Einwalter.

Panels on Migrations and Communication

Along with the aforementioned panel, during the two-day event the Ombudswoman moderated a conversation on an Ombudsman perspective on migration in Europe, organized by the International Ombudsman Institute (IOI) and dedicated to the discussion about the challenges faced by the ombudsman institutions working with irregular migrants in Europe and the modes of protection of the rights of this group at the EU’s external border. The Ombudsmen of Baskia, Manuel Lezertua, of the Netherlands, Reinier Van Zutphen, and Greece, Andreas Pottakis, spoke about the work of their institutions in this area.

Finally, Ombudswoman’s spokesperson and the moderator of the Equinet’s Communications Working Group, Ana Tretinjak, moderated the panel “The power of narrative: together for equality & human rights” jointly organized by Equinet and ENNHRI and dedicated to showcasing human rights campaigns by the Romanian, Estonian and Danish equality bodies as an important tool for public awareness raising and contributing to social change.

More information on the Fundamental Rights Forum is available here.