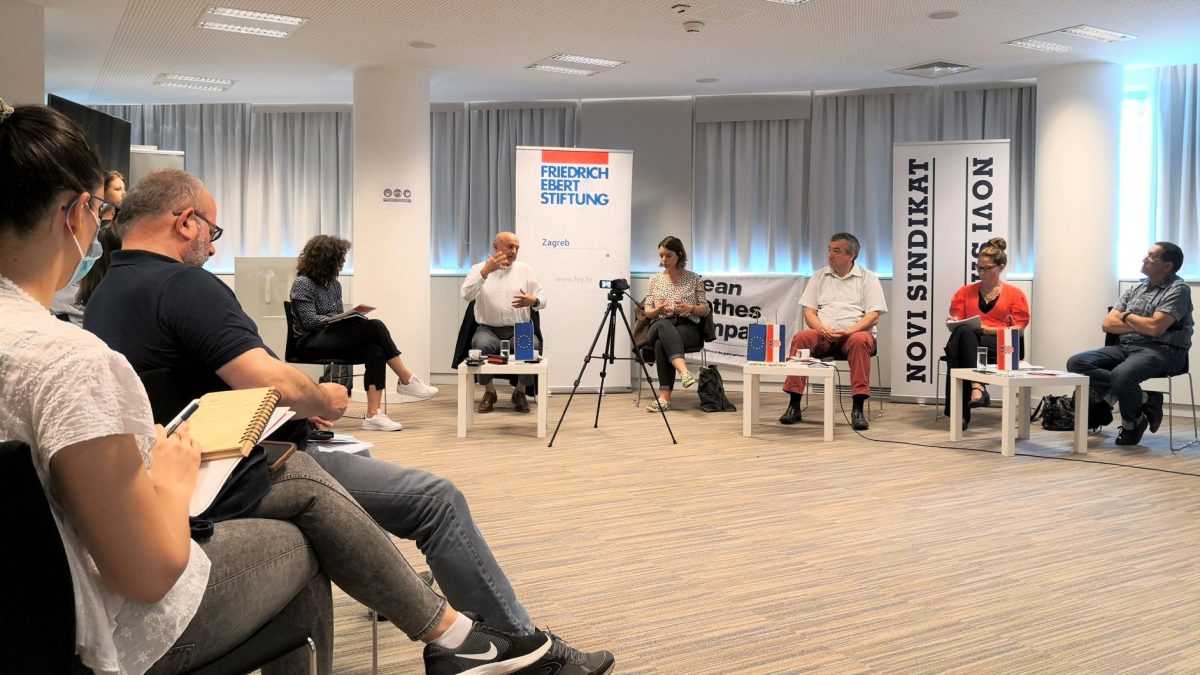 Compared with the concept of the minimum wage as a means to prevent poverty, fair wages would enable the workers to cover not only the food and rent costs, but also to school their children, buy new clothes, participate in at least the minimum amount of cultural activities and be able to accumulate at least minimal savings.

Fair wages were the main focus of the round table titled “Europe Floor Wage – Fair Wages are Possible” organized by the Novi Sindikat (The New Trade Union) on 9 June 2021 with support from the Friedrich Ebert Foundation.

Ombudswoman Tena Šimonović Einwalter spoke at the event and stressed that labor and employment are generally some of the most commonly represented areas in the complaints the Office of the Ombudswoman receives. Obviously, due to the pandemic, last year they were surpassed by those related to health care. However, during the current crisis many citizens lost their jobs, worked from home in inadequate conditions, failed to receive their salaries, experienced difficulties when it comes to reaching a work-life balance and suffered various other issues, emphasized the Ombudswoman.

In the Republic of Croatia the minimum wage is prescribed and regulated by law. However, despite that fact and despite its increase in the past years, it is by no means sufficient for a decent living and the wages paid out by some of the employers do not even reach its amount. Regardless of the fact that they are employed, the workers receiving the minimum wage are at a much higher risk of poverty and social exclusion. Their socio-economic position is even more complicated in certain situations – for example, if they live alone and cannot rely on other household members’ income or, on the other hand, in cases when they financially support other family members.

Discrimination Based on the Citizens’ Socio-Economic Status

Moreover, the unfavorable socio-economic situation the workers receiving the minimum or lower wages live in makes them more vulnerable to discrimination in various areas of life. It is often indirect discrimination, occurring at the structural level, preventing these citizens from participating on an equal footing with others in the public and social life. It is positive, however, that Croatian Antidiscrimination Act recognizes economic situation as one of the possible discrimination grounds and is one of the rare regulations in Europe doing so. Unfortunately, in practice there are very few cases before the courts citing this ground.

Who Is Suffering the Most?

The lowest salaries in Croatia are paid out to the workers in the textile and manufacturing industries, trade and the construction sectors. Most of them are women, persons with lower educational attainment form the rural areas, but also young people entering the labor market. The latter are often also exposed to precarious working conditions. Two or more such personal characteristics often overlap, commonly leading to multiple (intersectional) discrimination at the structural level.

Citizens receiving low salaries often face other issues in the labor market, such as being forced to work overtime, receiving fixed-term contracts or working without a contract. The latter then prevents them from exercising other rights, such as those related to health care or pension insurance. Moreover, in such cases the workers’ length of service is not being properly recorded, they cannot use vacations nor receive various benefits.

The UN’s Universal Declaration of Human Rights stipulates that “everyone who works has the right to just and favorable remuneration ensuring for themselves and their family an existence worthy of human dignity, and supplemented, if necessary, by other means of social protection”. International Covenant on Economic, Social and Cultural Rights cites the right to fair wages and equal remuneration for work of equal value enabling a decent living for the workers and their families.

The European Convention on Human Rights, the Council of Europe’s flagship human rights instrument, primarily protects the citizens’ civil and political rights, whereas the European Social Charter focuses on the economic and social rights. Within the realm of the European Union, the relevant rights are regulated by the Charter of Fundamental Rights and the European Pillar of Social Rights.

Speaking at the round table, the Ombudswoman emphasized the fact that Croatia has failed to submit its country report to the UN’s Committee on Economic, Social and Cultural Rights due in 2006 and is yet to ratify the Revised European Social Charter.

Growing Responsibility of the Business Sector

The state is the primary subject responsible for human rights protection. It does that by creating the conditions necessary for their respect and provides the mechanisms for their protection in cases of violations. However, taking into account the fact that big companies hold a large amount of power and influence and that power comes with obligations, a portion of these responsibilities lies on the business sector as well. These primarily entail respecting the globally recognized and protected human rights, at the very least those enshrined in the Universal Declaration of Human Rights, as well as upholding the principles put forward in the International Labor Organization’s Declaration on Fundamental Principles and Rights at Work and its Follow-up. It is with the aim of establishing a legally binding mechanism to regulate the human rights responsibilities of the business sector that the national human rights institutions, such as the Office of the Ombudswoman, participate in the UN’s Open-ended intergovernmental working group on transnational corporations and other business enterprises with respect to human rights.