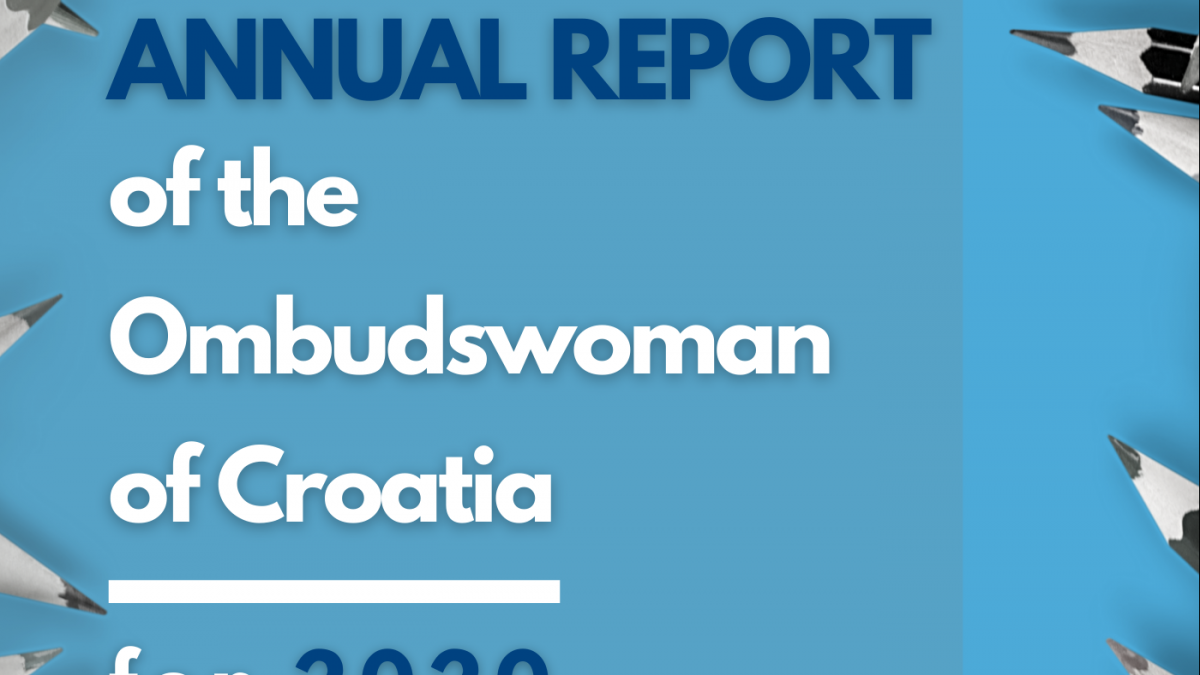 Ombudswoman Lora Vidović has submitted to the Croatian Parliament her annual report for the year 2020 containing an analysis of the issues faced by the citizens in the exercise of their human rights and incidences of discrimination. Its value lies especially in its 142 recommendations, mostly issued to the competent state administration bodies and aimed at achieving stronger human rights protection in virtually all areas of life.

As the report shows, the COVID-19 pandemic, as well as the earthquakes that struck Croatia in 2020, additionally exposed the deficiencies in various sectors already pointed to in the Ombudswoman’s previous reports, such as the necessity of establishing robust and efficient public health and social protection systems and of strengthening workers’ rights. Thus, we repeat these recommendations in our latest report, with the goal of building a stronger society, more resilient in the face of any future crises.

Most Common Types of Complaints and Resulting Recommendations

In 2020 the largest number of the citizens’ complaints related to the area of health: not being able to get in touch with their physicians or acquire the medication they needed, as well as the postponed appointments and medical procedures, which made the already long waiting periods even longer. These are followed by complaints related to employment, labour and civil service, submitted mostly by the citizens who lost their jobs or were required to work from home, but did not have the necessary conditions to do so. Third most common group of complains are those related to discrimination, most commonly in the areas of labour and employment and on the grounds of nationality, ethnicity, health and property status and age, reflecting the trends from the previous years.

The upgrade of the Public Health Network, introducing a limit to consecutive fixed-term employment contracts and stepping up education on equality and combating discrimination are some of the 142 recommendations featured in this report, whereas others stress the need for stronger protection of whistleblowers, populations of rural areas, the youth, national minorities, persons deprived of their liberty and many others.

Most Vulnerable in Need of Stronger Support; Poverty Among the Elderly on the Rise

The 2020 Report points to the deficiencies in the social protection system, worsened by the long-term delays in the adoption of new Social Protection Act, which leaves the most vulnerable citizens without adequate protection. The growing poverty rate among the older persons is worrying as well. During the pandemic they were one of the hardest hit groups, both because they were more likely to be affected by the more serious forms of the disease, as well as due to the effects of the measures introduced to curb the pandemic on their lives. The recommendations targeted at them call for the decentralisation and efficient monitoring of the homes for the elderly, introduction of a registry of the “for-life” and “until-death” maintenance contracts, as well as a lower census for the access to the assistance-at-home social service.

This annual report is the last published in the eight-year mandate of Ombudswoman Lora Vidović. During this period more than 40 000 citizens contacted the Office and over 25 000 cases were opened. Numerous recommendations issued – the reports themselves contain more than 1 000 – contributed to concrete social change, as well as the change in the lives of individuals and various social groups. You can explore these data in more detail here.

The 2020 Annual Report can be accessed here (Croatian language version).

Depriving the inmates’ rights must be argumented, necessary and proportional